I am trying to convert a team to a channel but I receive an error: “team-does-not-exist”. I have noticed this error a few more times but does not happen always. I tried both via the interface and the API. Attached are the screenshots of the interface with the error corresponding to the team I am trying to convert. I would like to share the corresponding logs but being a new user this platform does not allow me to. 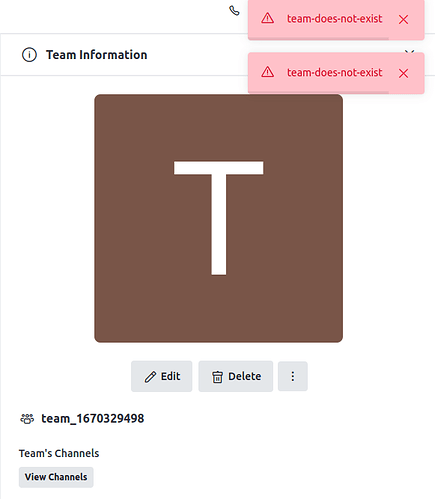 Please, always provide what version you are running and all the template required infos

This was probably fixed in 5.4. For reference

Let me know if this helps!

Hi @dudanogueira, not a problem.

I should have added the details to the post itself. Tried editing it later but I do not see an option to do so. Anyway, following are the details,

Reproduction is difficult, given that there are several teams created that were easily converted to channel without any issue. The process to create the channel is as follows,

The team should be converted to a channel.

I receive an error: “team-does-not-exist”.